The Day We Couldn't Find the Cat 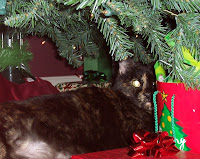 In early December of 2007, our cat Pumpkin decided to give our family a little pre-Christmas present, and not of the litter box variety. The day started great. I enjoy putting up holiday decorations outside and was careful not to let her out as I exited and entered the house, my arms straining with tubs of lights and garlands. At least, I thought I was careful. Pumpkin, you see, lived inside since we brought her home as a kitten. The one time she decided to do a little outdoor exploring, she didn’t like it. She slipped outside when no one was looking, and we found her shaking with fear under a bush in the front yard. On occasion, she ventured as far as the screened-in porch, but that was her limit for outdoor adventure.

On that particular December morning, she watched through the storm door as I unraveled the Christmas lights and strung them through the garlands of fake greenery twined along the front porch railing. After lunch, I noticed she wasn’t curled up in her favorite corner of the couch for her usual mid-afternoon nap. I suspected she was in the basement, a place of interesting smells but couldn’t find her down there. I shook her food container, which usually encourages her to emerge from her hiding spots, but she didn’t come. I didn’t panic yet. 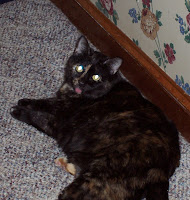 By dinner time, no one had seen her, not my husband, not my daughter, not his grandmother who lived with us. Pumpkin’s food bowl hadn’t been disturbed since the morning, when she dropped a couple of pieces of kibble into her water for a little flavor. I started worrying she’d snuck outside while I was putting up the decorations. My husband, daughter, Big Mama, and I called her name repeatedly. We looked under beds, in closets, in cabinets, but we couldn’t find her anywhere. As dark descended, I even walked around the yard with a flashlight, calling her name and searching under bushes.

By bedtime, I was certain she’d escaped the house and had met some tragic end. I’d promised my distraught daughter we’d get another cat if Pumpkin didn’t return. I went out on the deck and called her again, even shook the food container out there, knowing if she was alive, she had to be hungry. That was when my daughter felt something move under the reclining couch. Yes, our overweight cat squeezed herself into a small space she couldn’t get out of and hadn’t bothered to let us know until hours later. My husband and I had to flip the couch over to release her. She promptly meowed, licked her paws like nothing had happened, then headed for her food bowl. We think she finally had reached the point where hunger overcame embarrassment at being trapped.

Have you ever lost your pet? Where did you find it?

That is too funny! My dad inadvertently locked my dog out of the house, twice. Fortunately, she wasn't a runner like our previous dog. Both times, she was found a couple of hours later, sitting unhappily by the side door, waiting patiently to be allowed in. The last time she hid, on purpose, I was having a very frustrating day and decided to "let it out" with some yelling in the bathroom (great acoustics). I was home alone, so who would know or care? She did. I couldn't find her anywhere. I searched the entire upstairs. I was terrified she'd tried to make it to the basement. She hadn't been down there in years because the stairs were too difficult to navigate with her arthritis. Still, I couldn't find her, and I was frantic. Went back into my room to pray, again, and I can only say that God inspired me to be still and then look. My poor baby had crawled behind my chair and under my desk, with all the wires. Not easy for a 75 pounder with arthritis. Blessedly, she didn't damage anything, especially herself. Needless-to-say, I've never felt the need to yell again.

Our beagle, Kelly, once disappeared when a windstorm knocked down a section of our fence. I notified the local animal shelters and radio stations, but it was several days before a kind stranger called to report he'd seen a beagle in a marsh several miles west. Kelly was so pleased with her adventure I worried she'd start taking longer field trips whenever she escaped.

Our current two dogs often disappear, sometimes for hours. One afternoon a neighbor called my husband's office to say he'd seen two dogs chasing his cows. Dogs can be shot for that crime, but since this neighbor's cows sometimes break through the fencing and trample our yard, he owed us one.

The funny part was the neighbor's description of the dogs. He said he'd locked a black Lab (classically handsome Palmer) in his horse trailer. But he couldn't catch the other one... After a long pause, the neighbor said he was a dog with long legs. (Hogan's appearance isn't easy to describe.)

We lost a cat once and didn't know it! Our cats have always been indoor cats and rarely have we had an escape. We had been visited by a stray once, though, and in the middle of the night my son complained that there was a cat outside his second story, bedroom window. Thinking it was the stay, I went to look and it was one of our indoor cats! He'd somehow figured out how to get onto the small section outside the bedroom window and to meow until we let him in. After that we never worried much that he would get lost if he got out.

One day he escaped around dinner time and we knew he'd be back. Was he ever! He ran onto our deck pursued by a red fox! My husband scared the fox away and when we got the cat inside his neck was all wet. That fox had him in its mouth.

Our present set of cats are not nearly so adventurous. See more tomorrow.

Judy,
That must have been some sort of yell!

Diane,
I so enjoyed the story of the cat who liked to roam outside your son's second story window and I can't wait to read your blog about your cats tomorrow!

What great stories! I love a dog that defies description. And cats are so darn smart, but they DO have an ego problem when it comes to being rescued!

I have "lost" a couple of unusual pets. In my younger days (say 10 or so years ago)I had a nice collection of reptiles, rather large reptiles. One was a White throat monitor named Big. Just Big. He was a little over four feet long and looked rather ferocious and had a nasty habit of hissing when he was ticked off. Somehow he got out of his cage. Some of my students were over for a study session and I imagine someone left the latch undone. A search of the house found nothing. We finally decided to settle down and study and wait for him to come crawling out of whatever crevice he'd crawled into for a nap. One of the young men grabbed his lit book and flopped onto my couch. One very loud hiss later this kid jumped straight up at least three feet and screamed like a girl. Big had crawled into the back of the couch!

On another occasion a number of my students spent the night before we left on a trip to New Orleans. the guys were in the guest room. The girls were in the living room and small bedroom and I was in the master bedroom. At the time I owned a 13 foot, 100 plus pound Burmese python who had her own room. Her name was Big Mama. It was March and a very cold night. I heard a voice calling to me at about 3 AM. Woke me from a sound sleep. I got up and crept through the house with a flashlight so as not to wake the sleeping teenagers. The voice was coming from the bedroom at the other end of the house. Two male students were sleeping in the waterbed there. I opened the door and shone the flashlight on two young men lying VERY STILL with eyes wide open.

Here is the gist of the frantically whispered conversation.

Apparently someone left her room unlatched. Her heat lamp when out and she crawled through the house looking for warmth. A heated waterbed with two teenaged boys for extra warmth was just the thing. I peeled back the comforter and there she was snuggled between the two of them. Needless to say the girls got a HUGE kick out of it and the boys were teased all the way from Alabama to New Orleans about the night they spent in bed with the same "woman."

I had Big Mama for almost 25 years and when she died I got a number of condolence cards from my former students including the two boys, now grown men.

The story about big mama was hilarious! OMG!! I'd have peed my pants if it had been me lying in that bed.

Louisa,
I loved the stories about Big and Big Mama! I felt like I was there.

The opinions expressed in individual posts are those of the author, not necessarily those of the entire Wet Noodle Posse. Copyright of any entry belongs to the author. Entries may not be reproduced without credit and permission.